We spent 2 weeks in Rajasthan so we’ve split the tour of the state into 2 parts, part 1 is Agra, Jaipur and Pushkar.

We started off in Agra, home of probably the most famous Indian temple; the Taj Mahal. On arrival we visited a park that sits behind the Taj to see the “river side” as the sun went down a small crowd gathered to watch the ant-like people swarm in and out of the domes of the temple. The next morning it was our turn to be the ants, we woke up at 5.30am as we had be told that sunrise was the best time to see the Taj Mahal and it did not disappoint. There were less crowds, but still more than we expected, lots of short queues to get the Instagram-worthy shots!

Next up was Jaipur, a half-day drive from Agra. We went to the Monkey temple, which is both a shrine to the Hindu Monkey God and overrun with real monkeys, we never got to the bottom of which came first! From here it was a short climb up a hill to the Sunshine temple which has an amazing panoramic view of Jaipur. 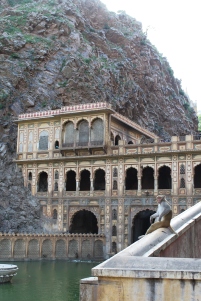 Top tip: keep small notes with you in the temples because if you are blessed you will need to give a “donation”, which are not optional and you will be advised if you don’t give enough! We were blessed about 5 times before realising you can politely decline before you’re out of pocket about 1000 rupees! 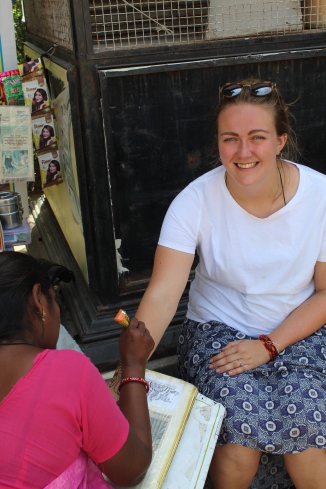 The next day in Jaipur we went into the old part which gives the pink city its nick name. The beautiful art deco buildings are a pale terracotta colour. We visited the Jantar Mantar where Ella could geek-out over the 18th century star constellation, astrology and time measuring apparatus (they have the largest sun dial in the world which could measure the time to a 6second accuracy, in the 1700s… pretty impressive!) We are trying to be positive tourists so we accepted the offer of a local guide in order to put money into the community, however this was a disaster as he failed to tell us anything, and wondered aimlessly around the grounds, so we gave him a small tip and carried on on our own.

No hurry, No worry!

The next place we moved to was Pushkar, this was the first city we had been to where there were a noticeable number of non-Indian tourists. Pushkar is a hippie paradise, people live by the phrase a tea stall holder said to us: “no hurry, no worry”. The town is tiny, we could walk from one side to the other in half an hour. There is a bazaar over 1km long full of stalls selling patchwork trousers and jewellery like that you’d find on a stall in Camden. The cafes mainly serve pizza and special lassi but we managed to find an incredible curry house (Raju, Main Bazaar) which may*** be the best curry we’ve had in India. 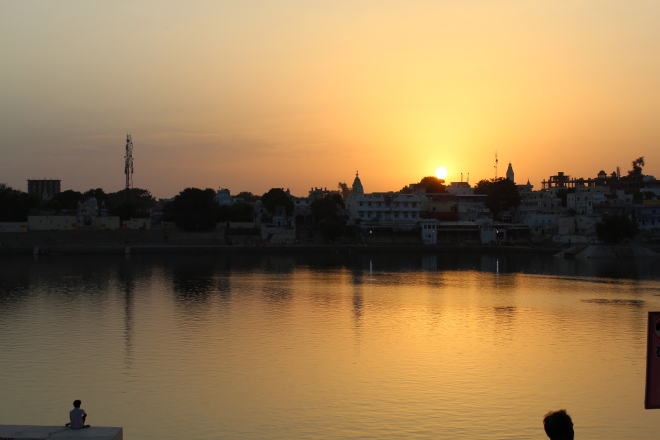 There is a holy lake in the centre of Pushkar which legend claims was a petal of a lotus flower placed down by a god in the middle of the desert. People from all faiths make the pilgrimage to bathe in it. For such a small town there are a lot of temples (500 or so), we visited during a festival where the statues of the gods from each temple were taken from their home and down to bathe in the holy lake, this was partnered with a lot of singing, dancing and music through the tiny streets. There are also temples on the hills surrounding the town; we opted to walked up to Savitri Mata temple (we love a steep hike apparently!) but there’s a cable cart going up and down the hill if you wish. The views are breathtaking from the top. You can see why the lotus flower legend was born as there is nothing but desert for miles around this tiny lake. 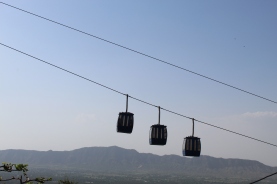 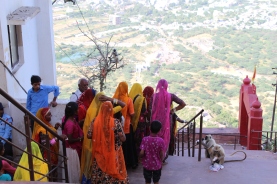